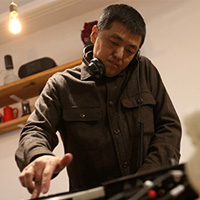 Released his debut album “Walking Forward” in1990, which at that time was an impact to the field of popular music. His works latter combined tradition with modernity, and they were fresh to the audience. In recent years, he took part in many film’s music composition, discovered a unique angle in the interplay of music with image. He was invited to perform in “La Soiree Movie-Mix Cannes 2005” in the Cannes Film Festival. A French distributor released his album “Insects Awaken” which gained a high opinion internationally. In 2005, he executively produce and performed in The National Palace Museum’s eighty-year anniversary commercial “Old is New”, in which he used cultural and historical relics to connect sound and image, in it he revealed a bold approach towards music, and proved himself to be an omnibearing artist.