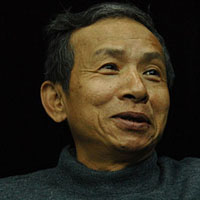 Wu Nien-Jen was born in a coal miner\'s family in 1952. He started writing short stories for newspapers in 1975, when he was still an accounting majored college student. After writing his first screenplay in 1978, Wu entered Central Motion Picture Corporation (CMPC) as a creative supervisor and worked with several pioneering directors such as HOU Hsiao-Hsien and Edward YANG. Wu has since written more than 75 screenplays that were made into films, and became one of the driving forces for the New Taiwanese Cinema Movement in the early 1980\'s. His works for the Taiwan New Cinema include “The Sandwich Man,”(1983兒子的大玩偶) “That Day on the Beach,”(1983海灘的一天) “Woman of Wrath,”(1984殺夫) “Dust in the Wind,”(1986戀戀風塵) “City of Sadness.”(1989) “Dust in the Wind ”is an semi-autobiographic work of WU. Wu set the record of winning the most Golden Horse Awards to date, among those includes the collaboration with the internationally acclaimed Hong Kong director Anne HUI(許\鞍華) on her film“Song of Exile,”(1990客途秋恨). His novels and screenplays also made him one of the best-selling authors in Taiwan as well. In 1989WU left CMPC to become a freelance scriptwriter. WU Nien-Jen made his directorial debut “A Borrowed Life,(多桑) in 1994. The award winning film commemorates Wu\'s Japanese-educated, hard-working father. The film won the Grand Prize at Torino Film Festival in Italy, and Best Actor and International Critics Awards in Thessaloniki Film Festival in Greece. In 1996, Wu wrote and directed his second film “Buddha Bless America,”(太平天國) a political satire set in the 1960s. Besides his directing and writing career, Wu cameo in films from time to time. But it was not until he acted in a series of beer and food products commercials that his acting talent was discovered. He was cast as the leading actor in Edward YANG’s latest film “A One And A Two,” which was critically acclaimed and won several international awards. WU runs his own production company Wu\'s Productions now, and actively writes, directs, produces and performs in both commercials and television programs.